What is the Difference Between iPhone 7 Plus And 8 Plus

In spite of having an unfamiliar name, the biggest new iPhone of Apple has arrived on the market. Although most of the attention has been taken over by the iPhone X, the iPhone 8 plus has also been launched by Apple along with iPhone 7 Plus. The question here is which one is better, iPhone 7 Plus or iPhone 8 Plus. It is a fact that different individuals have different opinions regarding this particular topic out there. In case you would like to know the difference between iPhone 7 plus and 8 plus, then make it a point to go through this article mentioned below.

Difference Between iPhone 7 Plus And 8 Plus 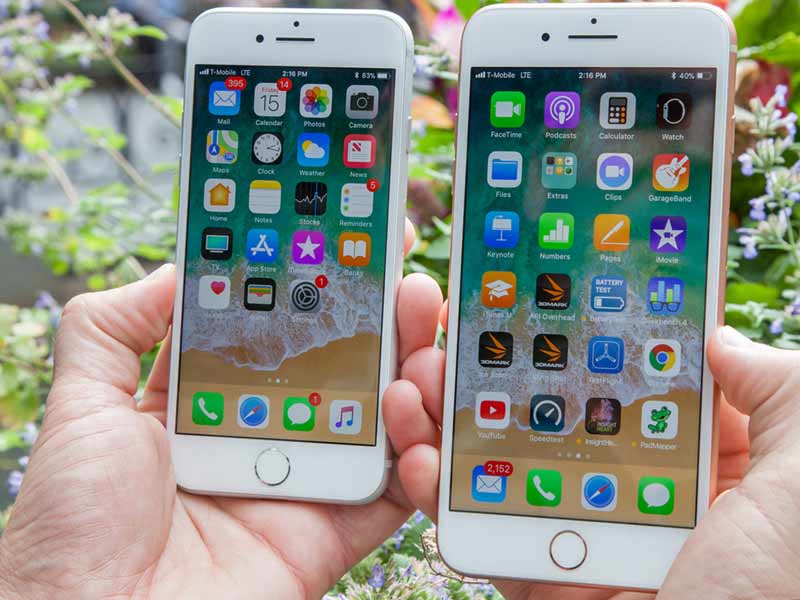 In case you have seen both the phones, it will be obvious to you that they are not much different when it comes to these 3 factors. In fact, the design of both the phones is almost similar and the only difference is the inclusion of a glass back in case of iPhone 8 Plus. With the LG G6 and Note 8 having a bezel-less design along with a blazed forward, there is no point in having such a big forehead as well as chin in the iPhone model. Although Apple has tried to change this by introducing the iPhone X, the design of the iPhone 8 Plus and 7Plus is a bit disappointing.

These 2 models are not much different in terms of display. Both of them come with an astounding 1920 x 1080-pixel, 5.5″ display with a 401 PPI measurement. Moreover, the iPhone 8 Plus used the True Tone technology of Apple that compensates automatically for the surrounding illumination while adjusting your display’s white balance as well. We are yet to see how good this technology is.

Both versions come with IP67 water and dust resistance and the durability of the iPhone 8 Plus has not been tested properly yet. Although there is unlikely to be much difference between the 2 models when it comes to water and dust resistance, the glass back on the 8 Plus seems to be something that is less resilient. The iPhone 7 Plus comes with an aluminum back which, at least, won’t shatter. Similar to the glass backing as seen on the Galaxy S8, a protective case was desirable for the iPhone 8 Plus though.

As compared to the iPhone 7 Plus, the battery in case of the 8 Plus seems to be smaller. In fact, it comes with a 2675mAh battery which is somewhat smaller than that of the 7 Plus’ 2900mAh battery. However, the battery life of the 8 Plus is going to be more than that of the 7 Plus thanks to the introduction of the A11 core technology. What does it signify in the real-world? As per the manufacturer, the battery life of the iPhone 8 Plus is better than that of its counterpart with 12 hours of Internet, a talk time of 21 hours, video playback of 15 hours, and audio playback of 58 hours.

We have preferred the 7 Plus for having the best smartphone camera for quite some time, and therefore, the iPhone 8 Plus should be having a tough time out there. However, it has been reported that most of the reviews on the camera of this model have been positive.

The 2 cameras do not have much difference when it comes to hardware. Both these models come with 12-megapixel cameras at the back and one lens has an f/1.8 aperture while the other features an f/2.8 telephoto. iPhone 7 Plus as well as iPhone 8 Plus features a revolutionary optical image stabilization along with 10x digital zoom and optical zoom which has been possible because of the telephoto lens. However, the 8 Plus happens to be in an advantageous position because of the Portrait Lighting feature.

Moreover, there has been a significant improvement in the 4K video recording given that the iPhone 8 Plus will be able to capture 4K video at 30, 24, as well as 60 frames every second. On the other hand, the 7 Plus is able to do this at 30 frames per second only. Although video capture is almost the same, the iPhone 8 Plus is capable of capturing slow-motion video in 1080p at 240 frames per second. The 7 Plus is able to do this in 720p.

Software is perhaps the closest category for comparing these 2 models. While the 8 Plus is going to launch with iOS 11, the 7 Plus is going to be updated to iOS 11 too. According to logic, the most recent device having the latest software is going to be the superior one. However, Apple’s smartphones are so well-optimized that several subsequent updates will take effect before the demands of an iOS upgrade outweigh the capabilities of older iPhones. In particular terms, you will not see a lot of difference when it comes to the software performance of these 2 models.

In case money is not a problem for you, then you should go for the best iPhone model on the market, and in that case, the iPhone 8 Plus is going to be your best bet (until the iPhone X is introduced on the market). However, at such a high price tag of almost $1000, it is quite difficult to see how the introduction of an enhanced camera, a new processor, and wireless charging can beat the price which is offered by the iPhone 7 Plus. By investing a few dollars less than the base price of the 64GB 8 Plus, you’ll be able to get hold of the 128GB 7 Plus which offers some innovative features that can challenge the majority of the current flagships out there.

Winner: The iPhone 7 Plus

It is the performance where the 8 Plus actually outshines its counterpart. The iPhone 8 Plus comes with some innovative features such as Apple A11 Bionic chipset, M11 motion coprocessor, Six-Core CPU, 3GB RAM, and Six Core GPU. On the other hand, the iPhone 7 Plus comes with Apple A10 Fusion chipset, Six Core GPU, Quad-Core CPU, 3GB RAM, and M10 motion coprocessor.

According to Apple, 70% quicker multitasking can be delivered by the innovative A11 chip (quite useful given that users swap constantly between apps), 25% quicker peak CPU performance, as well as 30% faster graphics. Apart from this, the manufacturer asserts that the 8 Plus happens to be 75% faster as compared to the 7 Plus while operating in the low power mode.

A11 Bionic happens to be the most powerful chipset ever made by Apple for its smartphones and iPhone 8 Plus will be featuring it out there.

All of these happen to be pretty serious upgrades, particularly considering the fact that the A10 chipset featured by the iPhone 7 Plus is faster as compared to any other Android competitor on the market at present. Although it is a matter of question whether such an upgrade will be required by you, it is nevertheless quite impressive in the long run.

Overall winner: The iPhone 8 Plus

Despite the fact that a brave fight has been put up by the iPhone 7 Plus, there can be only one winner out there. A lot of improvement has been provided by the 8 Plus over its rival which includes astounding performance and an awesome camera. It likewise uses fast charging while coming up with innovative features like wireless charging plus the most recent processor of Apple. Although the iPhone 8 Plus happens to be the clear winner, in this case, the 7 Plus has thrown a formidable challenge which cannot be ignored by any means.

In case you are trying to upgrade your 7 Plus smartphone and money does not matter to you, then it will be sensible for you to go for the iPhone 8 Plus. However, in case your budget is tight, then you can consider using the 7 Plus which will not disappoint you after all thanks to its almost identical astounding camera, Apple polish, as well as world-beating performance.

How to Connect Alexa to Samsung tv

How Does a Robot Vacuum Work | A Complete Guideline

How To Easily Activate MetroPCS Phone Without Paying